If you are currently running Windows 7 or up to Windows 8.1 like me, chances are you may have started to notice a new Windows icon appears at the bottom of your computer screen that kind of looks like the one used above this paragraph.

Well following months of speculation surrounding the release of the much-anticipated new operating system, Microsoft have finally confirmed the availability of the Windows 10 free upgrade, which will be available to download from July 29th 2015.

Inside our Cheshire web-design news roundup, our web performance team will take a closer look at some of the new Windows 10 features along with a verdict and how you can download the free upgrade.

Following the somewhat controversial release of Windows 8 which saw a lot of changes and removed features receive a critical response. Plans first serviced of a new and improved Windows operating system back in April 2014 with the promise of merging what had been successful in both Windows 7 and Windows 8.1.

Customers who are currently running the Windows 7 or Windows 8.1 operating systems will have a full year to take advantage of the free Windows 10 download which will be made available from 29th July across 190 countries in 111 languages. 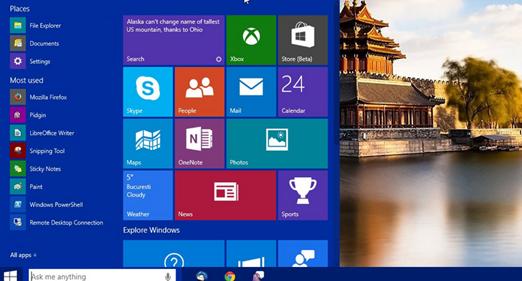 For Windows 8+ users, one of the most critical features to return has to be the ‘Start Menu’. Having previously deciding to ditch the start menu in favour of tiles in Windows 8, the reasoning was to try and encourage the adoption of touchscreen across all devices.

However the Start Menu has returned, this time compromising of elements from both Windows 7 and Windows 8 by presenting the essential Windows software such accessing settings or document folders those Windows 7 users will be accustomed to, along with a selection of application tiles that the user set as ‘Favourites’ along with a shortcut to access all applications.

First developed and released for Windows Phone 8.1 users, the intelligent personal assistant software makes the step up onto desktop devices inside the Windows 10 update.

For those of you who are perhaps unaware of Microsoft Cortana, the artificial intelligence as a host of cool features that you may find useful. By speaking directly to the software, it is able to set reminders, recognize natural voice commands and answer everyday questions such as the weather, traffic updates and even the latest sport scores by using information from Bing. 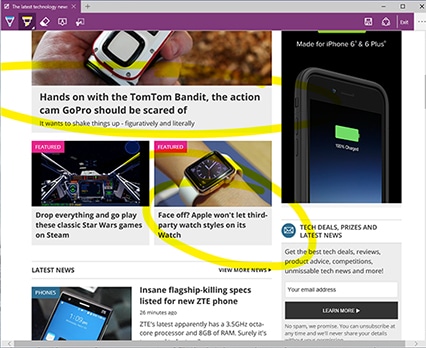 Formally known as ‘Project Spartan’, Microsoft has confirmed that they will eventually replace Internet Explorer with its news web browser, Microsoft Edge. Formerly introducing itself in Windows 10, Edge has been described as “significantly faster than its predecessor and includes a built-in notation tool” which will interact with Cortana to provide more personal results and actions.

Allowing you to remove some of the more distracting items on any page, Edge allows you to concentrate on the content. The browser will allow you to highlight bits of content in range of colours including adding any notes before sending them onto other users.

On previous Window systems, users had to use ‘ALT + TAB’ if they wanted to shuffle between multiple windows. Well inside Windows 10, Microsoft has released a visually pleasing update where you can view multiple apps and software windows titled ‘Virtual Desktops’.

You can access this cool new feature by either clicking on the ‘Task View’ button, located on the Windows taskbar, or by pressing ‘Windows + TAB’. If you happen to be working on an important piece of work, the improved ‘Task View’ will be a handy feature to flick through your document along with your online research. 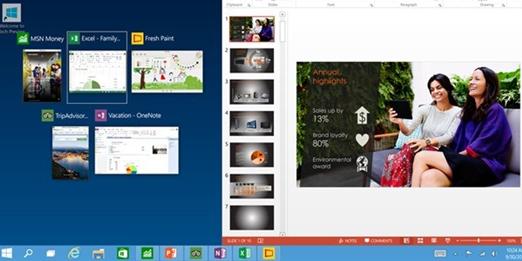 For those of you who perhaps have a Windows smartphone or tablet, the new Continumm feature will really appeal to you. For users who are using Windows 10 with a mouse and keyboard will see the new system in classic desktop mode. When switching to a table or smartphone, you will see the interface transform into touchscreen mode as demonstrated in the video below.

As a Cheshire web-design agency, it certainly is interesting to see how Windows 10 will be conceived by the public after the release of Windows 8.0. Having only scratched the surface inside this review, the features listed seem to only be an improvement.

If you want to download Windows 10 completely free, click on the small windows icon at the bottom of your screen and simply follow the instructions. If you enjoyed what you read, subscribe to our newsletter for more hints, tips and reviews on the web.