Welcome to a whole new Twitter. In an effort to seriously shake things up, twitter are set to introduce numerous changes that will seriously affect your twitter timeline and the way you will tweet in the near future. Following news of a stalling business growth quarter, twitter users have reacted angrily to the imposed changes which has lead to the hash tag #RIPTwitter trending worldwide.

As a Cheshire web-design agency with numerous clients who use Twitter to promote business, we are curious to see what impact these impending changes may have. Join us for an in-depth review of these new changes and look at how business can look to adapt with a brand new twitter. 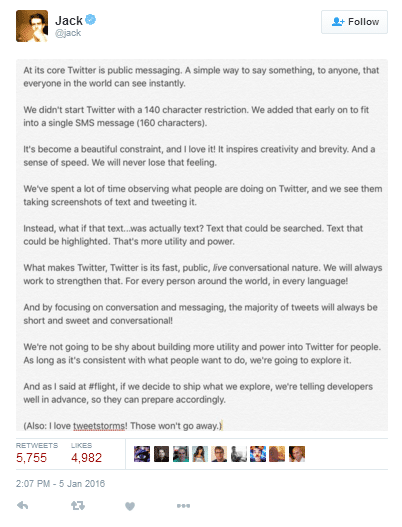 Let’s face it… Twitter’s 140 character tweet limit is what defines the social media platform’s identity and is often its biggest unique selling point when it comes to business interaction. Well things are about to change. Twitter have announced plans to increase the limit to 10,000 characters for much longer tweets which will be implemented as early as March.

Despite a backlash from twitter users, Twitter was quick to reassure users that they will not be bombarded with paragraph-long tweets which will quickly clog up your news feed. Twitter have stated that users will only see a snippet of longer tweets that will remain within the standard 140 characters on your news feed. Users will then have the option to click and expand the tweet to expose the full content. 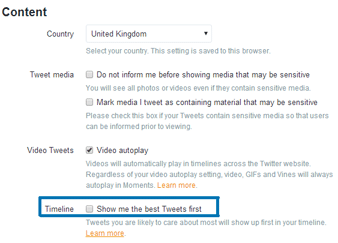 I’m sure if you have logged into your twitter account recently, you will have already started to notice this feature. When logging in, you will notice a new feature titled ‘While You Were Away’ which highlights a small handful of tweets from users who twitter have calculated as important to you at the top of your news feed.

Well Twitter is set to step-up their timeline efforts to prioritise important tweets from the people who you follow. When logging into your account, you can simply head into your settings and tick ‘Show me the best Tweets first” which twitter have dubbed “Tweets you are likely to care about most will show up first in your timeline.”

In an effort to appeal to businesses and advertisers alike, twitter have announced a new ‘First View’ feature which will let marketers place a video advertisement high up in all news feeds.

Twitter have stated that ‘First View’ will help marketers achieve significant audience reach by offering exclusive ownership of Twitter’s most valuable advertising real estate for a 24-hour period across numerous twitter users feeds. When logging in, users will now see a promoted video from any number of brands who may be of interest to them at the very top of their timeline feed.

The ‘First View’ feature is slowly rolling out to users in the US with plans in the coming months to expand across the globe. 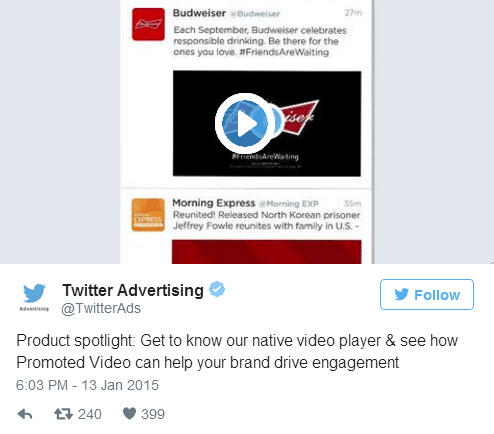 Because there will no longer be an restrictions on character limits, businesses posting updates will have much more freedom than posting a short snippet of text with a link to your blog. Longer tweets will allow you to be much more creative in captivating your audience without the need for them to leave twitter. When the user is required to leave twitter, a poor internet connection or numerous other reasons can lead to a communication breakdown.

Now saving the best for last, Twitter is now indexed by Google. This means when searching for a business or industry news, tweets will now appear in search engine listings. By drafting up longer tweets, businesses have the opportunity to write keyword focused content which could improve search engine rankings for your business.

Although twitter is now being compared to Facebook, small businesses should embrace the impending changes and look to use them to your advantage. As a business, you can take advantage of the character limits to offer an exceptional customer service and improve organic SEO at the same time. If you are looking to integrate twitter for your business or have any further question, why not get in touch with our social media wizard by sending a quick email to tom@untitedtm.com