In a year that has brought live streaming through the Periscope App, news breaking Twitter Moments and a complete new desktop interface, Twitter has arguably saved their biggest announcement of 2015 until now by introducing Twitter Polls.

Inside our latest blog, join our Cheshire web-design team as we take a look at Twitter Polls from a business point of view, the benefits to running polls and more importantly how you can create your very own for your personal or business profile.

Until now, Twitter previously encouraged businesses to run polls by requesting and tallying its user’s responses to tweets by counting the favourite and retweet functionality to engage response. Other methods also included encouraging interaction by sending direct replies to the tweet or by sending tweets with their votes by using hash tags.

Now all users will be able to create their very own two-choice poll from the compose box which will remain live for 24 hours. Any users can vote on any poll and each vote will not be shared publicly so only notifications that are sent directly to the business will have any power.

I think you will probably agree that this new feature will make it much easier for businesses to gain opinions and feedback from target audiences and engage with customers regarding what they think about certain products and services.

Creating your very own Twitter Poll is very simple. Simply go to compose a tweet and select ‘Poll’ which you will see in the screenshot below. Type the question that you wish to ask to your audience then finally add your two choices. Hit the submit button and there we go! 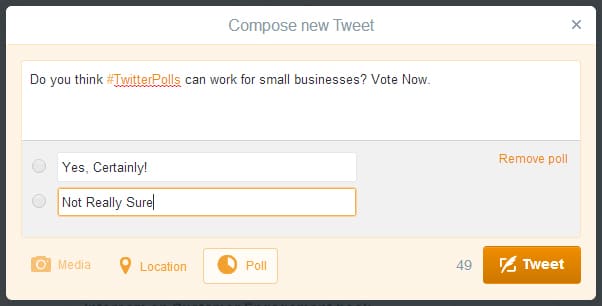 It doesn’t matter if you have a personal or business profile, creating a twitter account is completely free to use as free market research. Thinking about releasing a new product? Thinking of introducing an existing product in different colours? Using a Twitter Poll is a free way to engage what sort of preference your customers and whether it would be useful for customers.

Although you only have two choices to offer, businesses on twitter should still be encouraged by gathering vital data collection. You can use the poll to see if new or returning customers are willing to engage with your brand.

Asking questions has been somewhat an effect way to boost business engagement on Twitter, but Twitter Polls will provide an even easier way to engage with businesses. Rather than answering a straightforward question, twitter users will feel more encouraged by the simple click of the button along with the anonymous nature of only the business knowing who has clicked which option.

What do you think?

Since its release, Twitter have introduced the feature on desktop, iOS and Android meaning it is now available across all devices. Have you tried using your Twitter Poll for your business? Don’t forget to follow us @untitledtm and look out for some of our Twitter polls on there in the near future.