The stresses of opening an over flooding mailbox can sometimes feel like the weight of the world on your shoulders. Filtering through your entire inbox and catching up on replying, responding, saving and deleting emails starts to become a tedious full-time chore.

Well following our recent topics covering software applications such as Gmail and Google Drive and how they can make the everyday office tasks that much simpler, this month’s journey has taken us on the path off exploring what’s out there to ease email management. With that in mind we have discovered Mailbox, which so far, has certainly proved to be a hit within the office!

Originally developed by Orchestra, Mailbox is a refreshing free email management application tailored to revolutionise the traditional inbox industry. Providing a fresh, innovative interface, the application encourages users to manage and categorize their inbox with a series of touch-screen gestures providing simplicity in setting it apart from its competitors. Cleverly integrating a cloud orientated system, the application also allows users to sync numerous Gmail accounts meaning you can fly through your email on the go…

Initially released on February 7th 2013, Mailbox certainly provided a lot of buzz and excitement online weeks before it was even available to the public. With demand high and with Mailbox heavily relying on servers this prompted them to introduce a pre-registration waiting list in fear of their servers crashing upon release. With the queuing system in place, users would sign up reserving their places in the queue waiting to finally have access to the app.

With over 400,000 users, Mailbox became the second most downloaded free app on the iOS App Store on its release date. With the application proving to be a success upon its release, within weeks this prompted file hosting giants Drop Box to swoop and purchase the company in March 2013. In April, Mailbox was made available without a user waiting list.

There’s no better way to entice new customers by offering an app completely free of charge! Without any current restrictions or any promotional spam adds, there are no arguments to not try this new application.

The main focus on this application is the simplicity, with a fun, clean interface; it becomes very easy to sort each email.  A quick swipe to the right allows users to achieve their emails, allowing users to place important or saved emails into appropriate storage, while a long swipe to the right completely deletes the email.

A swift swipe to the left lets you “Snooze” an email, a very handy, unique tool allowing you the opportunity to remove the email then allowing you to set it to return at a time you choose. Finally a long swipe to left essentially allows you to skip the message and send it to a list of your choice such as ‘reading list’ or a ‘printing list’. 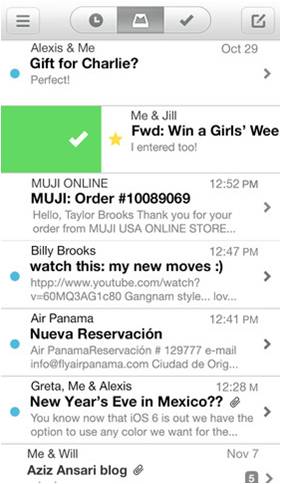 After installing the application, you’ll go through the standard tutorial to learn how to use Mailbox, while its super simple to use, there’s nothing to explain how users can select multiple messages. It’s only after digging around online; I was able to discover this!

Next is the “Batch Swipe” technique, an appropriate method when sorting less than 50 messages. Lists with fewer than 50 messages will have an icon located both on the bottom right and left of the screen that can be used to swipe the entire contents of that list at once.

Finally we have the “Archive All” technique. The option provided to all users as a way of clearing your inbox.

As already noted, Mailbox is available to download in the App Store, and is currently available for all iPhone, iPod Touch and iPad systems. The application currently runs using Apple’s mobile operating system IOS running ISO 6 or above, with a further 1.3.0 upgraded version for the iPad interface. It also allows users to sync up to five Gmail or Google Apps accounts meaning you can enjoy a simple, unified inbox.

Because Mailbox only supports Gmail accounts for the time being, this is arguably one of the only disadvantages to put users off.  Ultimately, this could potentially mean that if Google make drastic changes to their system it could completely change Mailbox. However Mailbox has promised they’ll support more and more devices and clients as they grow, with the first being Android with details on a timeline to be released in the near future.

Despite one or two teething problems, the positives certainly out way the negatives in giving Mailbox a try. With the additional ultra-cool simplistic user face, the effortless features, the availability and the lack of cost means there’s no excuse to download it now.  If you would like to discuss email management in more detail, why not get in touch and get an experts opinion on the situation.