Having led by example by purchasing live streaming platform apps such as Periscope and Maeekat, Twitter certainly gained a lot of mainstream recognition throughout 2015… Having predicted big things for Live Streaming in 2016, it was only a matter of time before rival social networking pioneers decided to catch up and that’s exactly what Facebook have decided to do by introducing ‘Facebook Live’.

In July of last year, Facebook decided to launch their own live streaming platform which was initially only to available for verified celebrities such as actors, musicians and athletes to use who wanted to engage with their fans which would appear in your news feed. Following its success, the platform was even involved in the recent national CNN presidential debate. From early December, Facebook Live was introduced to all verified Facebook Pages and personal profiles following a worldwide roll-out. 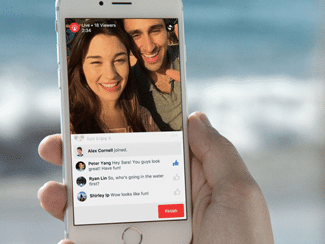 How you can start live streaming

To broadcast using your business profile, simply head to your profile, tap to update your status and click the ‘Live’ icon which you should now be able to see… Before broadcasting, make sure you write a status update which will be used as the description that will appear on the news feed and notifications.

Finally, just like ordinary statuses, you can select the audience before going live which will be the choice of friends only, a specific friends group or public then simply tap ‘Go Live’.

How you can use Facebook Live for your small business

Just like every form of social media interaction, live video streaming can provide a different approach of sharing, engaging and expanding your reach on social media. From a small business point-of-view, video streaming integrated with Facebook can offer several advantages which include;

What instantly sets Facebook Live apart from its competition is there are no set time boundaries. Although Meerkat offers mobile streaming, your videos are immediately deleted after broadcasting whilst with Periscope, they are only live over a limited time period which is usually 24 hours. With Facebook live, your videos will stay on your wall for as long as you wish which maximises your audience reach. With re-sharing and liking videos, friends who may not be aware of your business will see their interaction which may encourage them to check out your business page.

Although you can argue that Meerkat and Periscope are integrated with Twitter, you will still have to set up separate accounts with both live streaming platforms which will unfortunately mean you will have to build your audience from scratch. If you already have a Facebook business page, you already have an established audience who are interested in business so you can inform them ahead of time when you are about to broadcast.

It doesn’t matter if they are existing or new fans of your Facebook business page, once they subscribe, they will automatically receive a notification when you have added a new video. From a small business point-of-view, this can become extremely beneficial as users who may have missed out on the live streaming will automatically be remained as soon as the stream as aired and once you log back into your Facebook account. 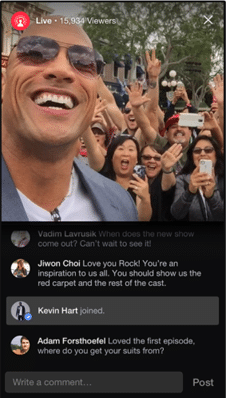 Visual content such as video usually appear within your news feed a lot quicker than regular posts. By adding a killer description to your video, you can look to capitalise on fans interacting with your video as that interaction will appear in their friends news feed which will help to maximise your reach and maybe even lead to their friends browsing and subscribing to your business.

As with Periscope, Facebook live allows comments to appear onto the screen during the live broadcast. However, what sets them apart is Facebook doesn’t automatically delete the stream after 24 hours meaning more comments, likes and share will happen over the course of a timeframe which can help with feedback on new products launches or offers…. Businesses and users alike can also change the settings to turn comments off altogether.

Do you think Live Streaming could work for your small business? If you are thinking of giving it a shot, Facebook have introduced 8 best practice tips to help you make the most of live streaming. Get in touch with us on twitter or by dropping a quick email to our Web Grower Tom and let us know your thoughts or what experiences you have had with Facebook Live Streaming.