Well it certainly seems like Google have had a busy few weeks. Following the blockbuster announcement on Google’s impending mobile-friendliness algorithm update dubbed ‘Mobilegeddon’ our Cheshire based web-design agency has been swamped with calls and enquires on how to ‘Make my website mobile responsive’ but the buck doesn’t stop there…

On April 8th, Google announced that in preparation for the major mobile search shake-up, they have now launched a ‘Streamlined Search Results’ interface that is optimised for both slower and faster mobile connections so it seems like having a mobile presence is now even more important than ever

When will the change come into effect?

Located in South East Asia, Malaysia is currently the world’s fifth slowest for loading pages on desktop computers and continues to follow with the same pattern on mobile platforms. With an average loading speed of 14.3 seconds, the interface was first publicly announced and rolled out on the Google Malaysia Google+ account to much delight of the population.

The new ‘Light’ interface for Google Search is now immediately available for all mobile users using Google Search worldwide. What’s best about the change is not only access to faster results, but users also don’t have to fiddle around with downloading any updates so you can enjoy the interface now.

What are ‘Streamlined Results’ for mobile search?

So let’s say that you need to quickly pop online to access some quick information on your smart phone, have you ever found that Google’s search results were delayed due to slow connection speed which feels like forever? Well to combat this, Google have announced the solution to the problem by rolling out a new, streamlined version of Google’s mobile interface which has been optimized to load quickly on slow connections.

Depending on the internet connection speed in the area you attempt to access data, Google will tone down the search interface to make the search results load faster. 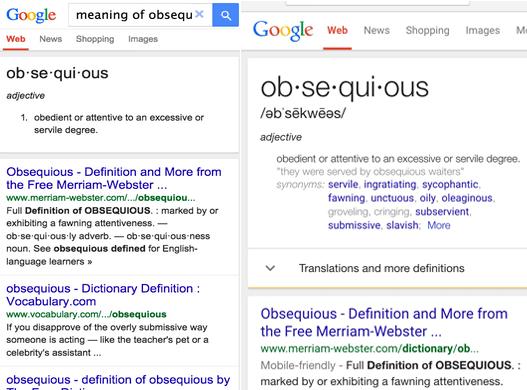 To quote Google on the announcement “To make sure you’re not waiting on Google when you need it most, we’ve rolled out a streamlined Search results page that loads fast, even on those slow connections. You’ll get all the info you need in a simpler format that’s beautiful and easy to use”

Whilst I personally think that this is a great idea from Google, they have not yet publicly discussed what the specific criteria is that determines when a connection is slow enough too active the streamlined version of the mobile search.

From a Cheshire web-design point of view, it would also be an idea to consider allowing the user to choose if they would prefer to use the streamlined version of the search results or not irrelevant of if the connection is strong enough.

If you are a business concerned by the impending Mobile search changes that come into effect later this month or are looking to make your website mobile-responsive ready, why not get in touch with the Cheshire web design experts? Give James Cox a call on 01565 653616 or send us an email at admin@untitledtm.com. We look forward to hearing from you.