You have probably come across the frustrating spam and robot CAPTCHA challenge thousands of times before when browsing online. When filling out information, you are greeted with words or numbers that you have to type in that are either blurry, wavy or have lines through before you can submit your details.

From a small business website owner’s point of view, regardless of how difficult the CAPTCHA forms present themselves, spam enquires always seem to break through and according to artificial intelligence company Vicarious, they can solve modern CAPTCHAs with character recognition rates of up to 90%

As a web design agency based in Cheshire, we thought we would review and explain the changes so small business website owners along with visitors will have a better understanding and experience when next browsing online.

In December 2014, Google decided to go back to the drawing and unveiled ‘No CAPTCHA reCAPTCHA’ a simpler, yet more sophisticated API protocol to finally try and put an end to spamming.

With our business built around the web industry, our Cheshire-based web design agency has experienced CAPTCHA from its earliest form to where it has been developed to now. An acronym for “Completely Automated Public Turing” test to tell Computers and Humans Apart” CAPTCHA was first introduced in 2000.

Example of distorted letters in a CAPTCHA form.

The biggest surprise is the simplicity of the API design and the way it processes the determination of if a user is human. Along with typing the text out, users will now also have to confirm they are human by simply clicking on a check box next to the sentence: “I’m not a robot!” Here what Google had to say about it…. 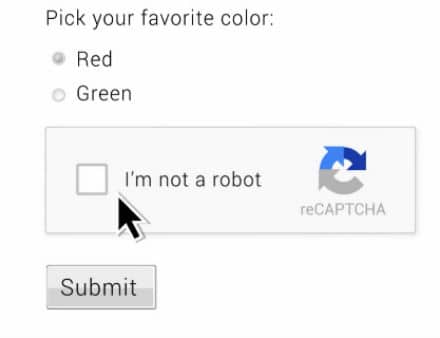 Introducing the new No CAPTCHA interface…

reCAPTCHA is the most widely used provider in the world so the security has heavily been updated. Using advanced risk analysis techniques, it presents an unparalleled view into abusive and current trends so it can separate human from machine users.

The interface has purposefully undergone a complete makeover so it’s extremely easy for people and much harder for robots. For the visually impaired, reCAPTCHA provides an audio option which has been designed to be easy to listen and solve for humans whilst much harder for robots with a view of trying to block them.

Interestingly, with No CAPTCHA reCAPTCHA the CAPTCHA’s used are made from a mixture digital books and text visible on Street View imagery that cannot be read by computers that can easily be solved by humans.

Since its inception, reCAPTCHA now offers Plugins for several web-application platforms such as ASP.NET, PHP and Ruby to ease the implementation of the service. Already, websites and platforms such as Snapchat, WordPress and Humble Bundle along with several others are already seeing great results.

As a web design agency based in Cheshire, if you are unsure of how you can install No CAPTCHA reCAPTCHA we can install it for you regardless of which platform your website is currently built on.

Criticism of the No CAPTCHA reCAPTCHA has generally been met with positive reviews. With mobile versions now available to use, Google continue to up their game by trying to stop abusive bots and scripts.

If you would like to install CAPTCHA on your website, why not get in touch with the Cheshire Web Design experts? You can contact James Cox on 01565 653616 or alternatively you can head over to the untitled™ contact page to get in touch.