When it comes to social media, timing is everything. As a small business, with what limited time you put into social media, you only want to send messages when people will actually want to read and engage with them right? As a Knutsford Web Agency involved in the digital industry, we certainly would!

So, when is the best time to post on social media? 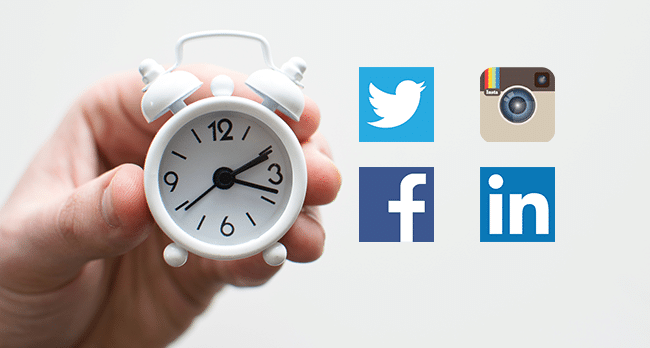 Answering honestly, there isn’t one!! However, different businesses will find a variety of success based on a number of different variables such as type of platform, audience, goal and the time of day. While there may not be a definitive secret formula when it comes to perfect timing to post on social media, our Knutsford Web Agency will guide you through each of the most popular social media platforms with a number of helpful resources that will hopefully help you find the best optimal times to reach those customers!

Instagram is the most mysterious of all social media platforms simply due to the fact that each users content feed will not appear in a strictly chronological order. Instead, each individual feed is unique and built on several factors meaning each user will see content differently.

Based on several key components, research indicates that Instagram feeds are built on how relevancy based on your interests, how often you view and interact with particular Instagram accounts, how recent posts are and how popular it is interacted with and finally if other users in your network follow the same accounts. This means that posts with lots of engagement such as likes and comments will have a better chance of appearing near the top of your feed and as suggested content to followers who do not follow you but have similar interests.

When is the best time of day to post on Instagram?
Due to Instagram being an exclusive mobile app, typically users will only look on their phones to look to post before and after the 9-5 routine. Look to target users on their commutes or if you want to post during the time, target lunch time where you are likely to catch up on social media during your break.

Twitter continues to be the fastest way businesses communicate with customers via social media. With quick, punchy tweets, twitter constantly moves at a lighting pace because users and customers find twitter as the easiest social media platform as first point of contact.

Although Twitter have introduced recent algorithm changes, twitter feeds are still straight forward. You will usually find twitter highlights some of the top tweets you may have missed, throws in some recommendations from tweets other followers have engaged with, then displays real time tweets in reverse chronological order.

When is the best time of day to post on Twitter?
Due to twitter being both business-to-business and business-to-customer orientated, it isn’t as simple as posting around work hours. According to hubspot, b2b interaction performs 16% better during business hours with the best optimal times between 12pm-3pm and 5pm during Monday – Friday.

TIP – some twitter users may look to catch up on what’s going on after work hours so look to take advantage of twitter auto-scheduler and auto-send tweets out in the evening so you can compare the data.

Facebook doesn’t use any type of chronological feed, although you can change your settings, so instead what you actually see is determined by an algorithm that Facebook thinks you want to see in an attempt to boost click through rate and maximise engagement.

The posts that show first in your news feed first are influenced by a number of variables. Facebook will order posts based on your connections and how regular you interact with them, posts from your friends which receive the most engagement and finally the type of content such as photo’s, video’s or status updates. In the most recent update, Facebook has firmly got behind video engagement which is why you will mostly see video’s at the top of your feed every time you log into facebook.

When is the best time of day to post on Facebook?
A number of sources have confirmed that the most interaction you will get is posting on Facebook between the hours of 1pm – 3pm. Content other then status updates such as video or infographics have also proven to receive much more engagement. What’s also interesting is Facebook users are far more likely to engage with content on a Thursday and Friday as they look forward to the weekend.

TIP – Just like Twitter, Facebook has it’s very own analytics you can take advantage of to track data so you can see what works by sending posts around the clock.

Used as a strictly business social media platform, LinkedIn is the most straight-forward when it comes to viewing feeds as it typically displays the most recent content, followed by highlights you may have missed. As a Knutsford Web Agency, professionally we may see a number of business influences from what other industry-leaders may have posted.

When is the best time of day to post on LinkedIn?

As professional business platform, is shouldn’t come as any shock that the best time to post any updates is during work hours. However, statistics have also proven that business people are far more likely to engage with LinkedIn as a social media choice during commuting, so interaction can also be high between 7am – 8am.

When is the best time of day to post on LinkedIn?
Because LinkedIn is tailored more towards business professionals, look to target the around the working week so 9-5.

What days and times have proven to be the most successful for your business? Although there are not any definitive times that work best for every social media platform, as a Knutsford Web Agency, our professional opinion would be to try posting content and any time of the day and gathering the information such as impressions, interaction and engagement to give you a better judgment on what works best for your business and your target audience.

For more news, reviews and advice on how to grow your online business presence, subscribe to our Web Grower Newsletter or feel free to take a look around some of our other helpful blog posts.