The logo is the most publicly recognizable branding tool any sized business can have. It doesn't matter if it’s an icon, a logogram or a sports crest, the branding aids and helps to promote instant public recognition amongst your customers.

Over time, almost every major brand will go through a redesign or several to perhaps signal a new approach, direction or partnership, or sometimes it’s just modernising the branding to keep up with recent trends. Whatever the reason, rebranding or a redesign can always receive mixed reviews but there have been major brands that have been very successful.

In this web grower article, our Cheshire web design team are going to take things in a different direction and take a look at some major branding which have proven to be a successful choice.

Fitness First is the largest privately owned health club group in the world. Based in the UK, Fitness First have grown significantly from their humble beginnings of operating one gym on the cost of Bournemouth to having 78 Fitness Clubs with over 170,000 members in the UK alone.

As part of a £225 million worldwide investment, in 2014 Fitness First appointed a UK based consultancy agency with the brief of creating a branding identity that was instantly recognisable which could compete with the sportswear giants of the Nike and their trademark tick and the 3 lines associated with Adidas. Introducing the ‘1F’ monogram, the new redesign works as a great piece of design that not only supports the full name of the business but also easily works as an independent fitness brand. As part of its continued rollout, the new branding has been incorporated across all training facilities worldwide. 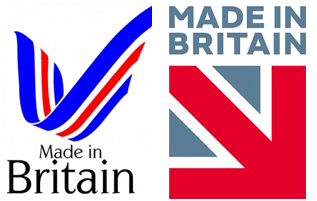 Although Made in Britain has a relatively short history having established in 2011, the independent, not-for-profit organisation has certainly had a lively time of things. Originally conceived by a British cooker manufacture in 2011, things quickly escalated and evolved into an origination which consisted of a committee made up of well respected British manufactures.

With UK-based businesses needing to apply to join and use the artwork on their products, in 2013 the organisation felt they wanted to add equal merit to both the UK heritage and the manufacturing. Appointing a UK-based consulting business, the rebranding cleverly achieves this with the corner of the union jack pointing to the products made in Britain.

Since its creation, any Google search or product page has always remained relatively straightforward. Customers are used to the iconic multicoloured logo sitting above a clean white canvas so it was certainly a surprise to see the rebranding introduced last September the biggest update in nearly 16 years.

Ok fair enough, Google have the ability to create their own typeface titled ‘Product Sans’ which just about every business doesn’t have, but the implications were massive. Think about all the products that will have to go through the same branding exercise so it’s a pretty bold step by Google. 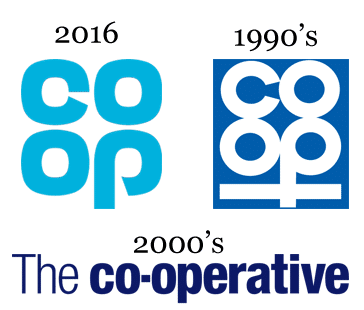 Over the years, the Co-Operative brand has certainly gone through its fair share of rebranding. As of May 2016, the Co-Operative brand announced that they would be returning to its classic clover-leaf design which first appeared across shops, produce and insurance brands in the late 1960’s which is still considered to be the brands most iconic logo today.

Having recorded its biggest loss in profits in 2013/2014, the Co-Operative brand were going through the worst period in its history and the identity branding was a major goal in helping the recovery phase return back to profit. The logo roll-out is expected to be completed on all branding, produce and transport by 2018.

Returning to a previous identity is certainly an unusual move for any company, let alone going back to one that is nearly 50 years old, but returning to a brand which is has an instant public recognition to shoppers from the 1960’s has proven to be a bold move that has certainly paid off.

Just about everybody owns a computer, or at least has internet access, so there really wasn’t any escaping from the mass Windows 10 update which dominated Cheshire web design news last summer.

Along with the free update, Microsoft decided to scrap Internet Explorer altogether and took the opportunity to introduce a totally new web browser in Microsoft Edge. Although this counts as a total high-risk rebranding and renaming exercise to a product familiar with millions of users, it was actually a clever move by Microsoft. With ‘Explorer’ moving to ‘Edge’ the very familiar ‘E’ icon remained the same instant public recognition but also promoted Microsoft’s latest product where users didn’t really have to blink an eye lid.

So I hope you enjoyed reading our 5 very different rebranding examples. Sometimes a rebranding can work wonders for any size business if you are about to take the business in a new direction. As a Cheshire web design agency, we have advised and have created a number of rebranding projects for local businesses. Take a look at our Portfolio page and for all enquires, why not give us a call on 01565 653616.